Sabre sterile disposable scalpels are fitted with the following blades; B/23 Sabre, D15 Sabre, and E/11 Sabre. The handles, now in the familiar Swann-Morton blue rather than grey, carry a graduated measure (for indication only) on the reverse side to mirror our range of metal stainless handles and are marked with the CE symbol which previously only appeared on the outer product packaging.The sterile scalpels are individually packaged but into a new transparent thermo formed tray providing improved product visibility and developed to assist in safe passing techniques. When peeling the packet the seal changes colour thus indicating if the integrity of the packet has been breached and assuring the user of sterility up to the point of usage. 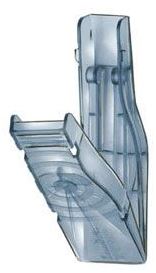